skip to main | skip to sidebar

Posted by Unknown at 6:33 AM No comments:

Posted by Unknown at 6:25 AM No comments:

Posted by Unknown at 5:53 AM No comments:

Oh, hi! I didn't see you there! It's been a while, but you're looking good.


The masked Peter chases after the cloaked Japanese experience in the night. So in Japan, people where these masks for many reasons: germ prevention, allergies, no make up, and so on. I was forced to wear one at work when I came down with a case of the plague. Believe it or not, Japan's level of modern medicine can be quite disappointing. Hospitals actually close everyday, blood tests are done sparsely, and communication boundaries play heavy roles. At least the healthcare is incredibly cheap! A typical doctor's visit will cost me 10 dollars, medicine and all.


Today, I found myself unable to sleep due to a cold and lack of insulation in my apartment. I wandered out for an early lunch with a friend at a local Cafe in Kichijoji. I always find myself getting the same thing. They only have 4 dishes on the menu but each one is delicious. I never ate curry in the U.S, so I can't really compare, but Japanese curry is the bomb. I eat it on cold days for a spicy shot of energy and season filled flavor. I highly recommend it! During the lunch, we discuss cultural differences. A girl was held in captivity for 10 hours the other day, as she was milked for the funds in her bank account and other assets. This makes nation wide news. In another incident a 4000 police officer search was underway for a missing girl who later turned up, as seems to be the norm, unharmed. I explain that in any given major city in America there is at LEAST 1 murder per night. Minds were blown. 1000 experience earned, my love for the safety of Japan levels up. Soon, I'll move on to the next stage. 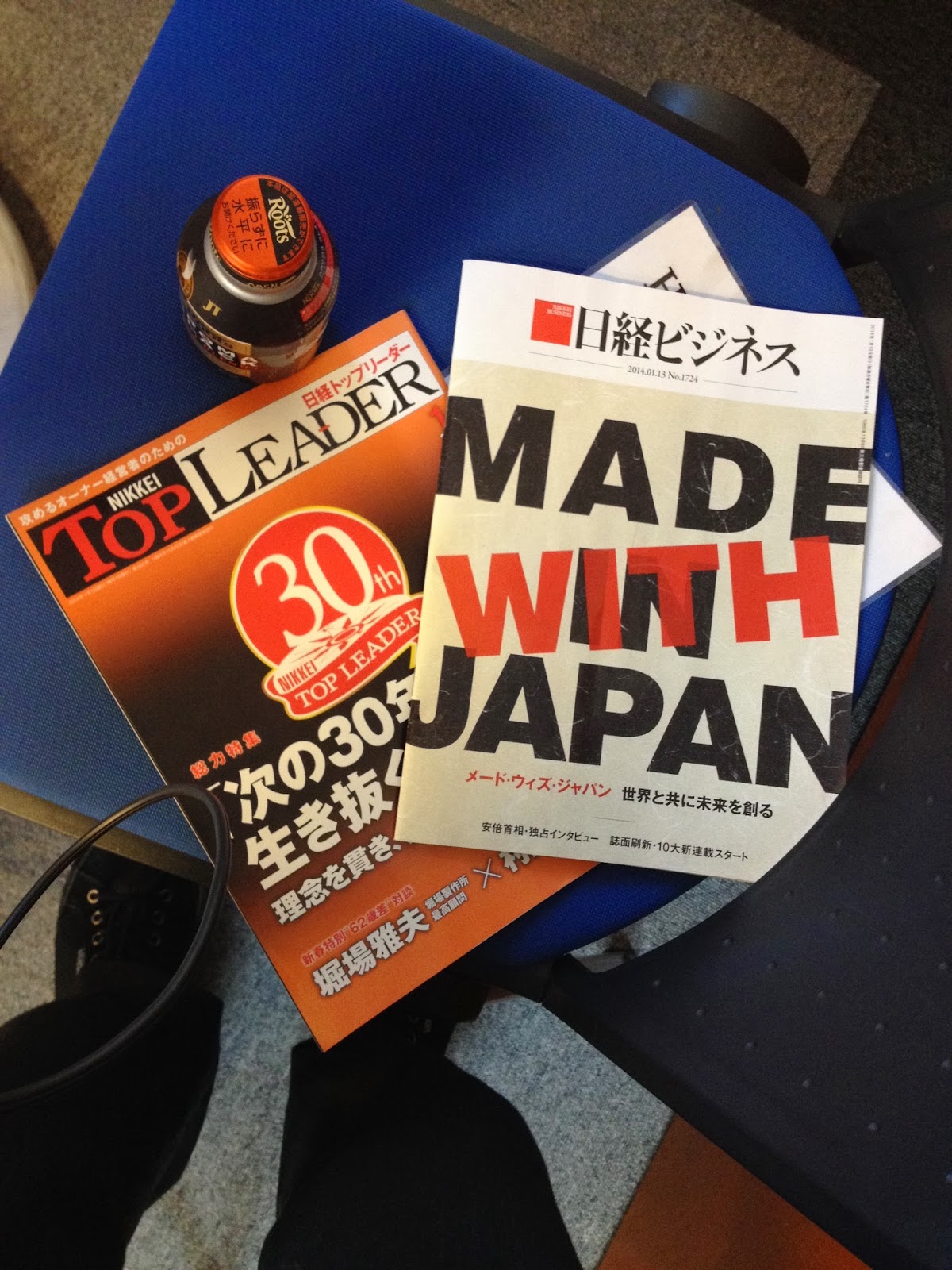 Lastly, I was interviewed by a couple magazines in Japan. I'll write more on that along with the horribly awkward pictures on my next post. So, I'm getting by...how are you? :)

Posted by Unknown at 7:03 AM No comments:

My new life in Kichijoji

"Humans are cowards in the face of happiness" ~ I heard this from some crazy (Yanki) girl in Japan.

Yanki are one of the many subcultures in this crazy cartoon country I live in. They typically have dyed blonde hair streaked with remnants of brown or black, wear dark, torn clothing, ride on majestic scooters into the sunset after some scheduled Wednesday night brawl with the rival gangs. They love to loiter, smoke cigarettes, down wine coolers in front of the local Don Quixote or convenience store. I've never been bothered by one, but they seem to be looked down on by the majority of the populous. I heard some of them upgrade to Yakuza if they're lucky. But what do I know. I'm white XD. 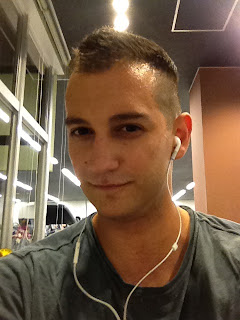 It's not easy being a foreigner in Japan sometimes. I moved to Tokyo, recently, to start my new job as an underwear model ;). I also write when I can and teach English; typically to doctors, businessmen, and international departments at my new company. The lifestyle here is drastically different from the Kyoto area. Millions of fashionable people crammed into sardine can sized streets, trains, and department stores mindlessly stampede in cycles around the city on a 24 hour basis. Despite the density of this ant-farm, there are days where I feel I have hardly spoken a word to anyone. Foreigners are always foreigners here. It takes time to sort through the hoards of solicitors, for people actually interested in your genuine friendship. I should wear a sign or T-shirt with the answers to the routinely stated comments or asked questions:

It was flattering and exciting the first 200 times. 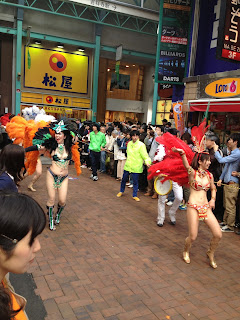 I live in Kichijoji now. It's 15 minutes from central Tokyo, an incredibly good area I'm told. I love it. I'm a 9-10 minute walk from the train station. A labyrinth of shopping arcades, restaurants, bars, chains, department stores, coffee shops, grocery stores, pachinko parlors, and movie theaters riddle the space in-between my apartment and the station. I find myself on many late night strolls exploring the area. The day is infested with shoppers, families, couples, and youngsters. The night seems to belong to other solitary people like myself. I run into the occasional pack of drunken salary men or cackling young girls looking for the next drink. 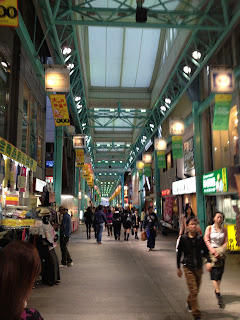 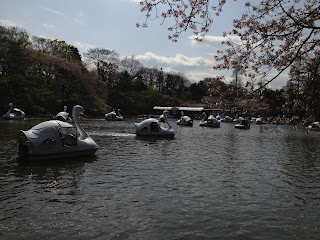 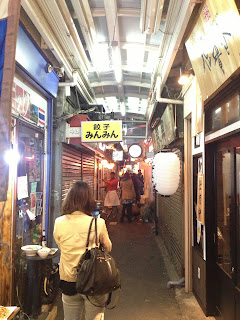 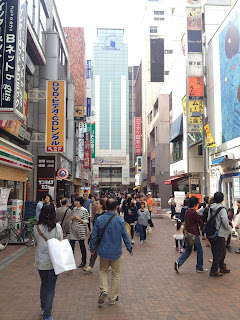 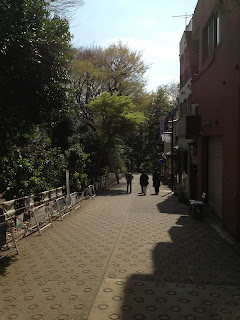 There's a beautiful park, as well: Inokashira Park. The pond is a battlefield, controlled by swan boat pilots and the resistance. I don't know who's winning the fight, yet. There's a small zoo, which boasts one elephant, and seemingly every single bird from every single Disney movie. 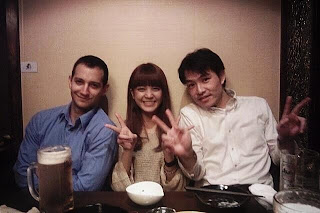 I haven't forgotten the handful of friends I have made in Hikone, almost 2 years ago now. On occasion, I have a run in with them even while dispersed across this tiny country. They haven't changed a bit...

I wonder if I have.


What have you been up to, Peter. Brace yourself, cause here it comes.

Nick "the feenom" Mellusi came to visit me this month, he is an old neighborhood pal. The day I picked him up we ended up here ^ in the picture above, Cream bar. My friend Yukari works there, so we stopped for a few free drink tickets, darts, and catch up conversations. I forget the names, but many under-aged girls who fooled us, initially were there enjoying zima's and smiirnoffs, as many girls...and unfortunately boys, do in Japan. Rarely, am I, a foreigner, carded or ID'd, so it's no surprise that Japanese folk are rarely carded as well, making it easy for minors caked with make up to sneak into naughty establishments for alcohol and such. After being propositioned by young girls, we were wise enough even in our intoxicated state to walk away and say no to drugs...and thugs.
A swift trip to Toyko had us doing all sorts of sight seeing. Roppongi, Shibuya, Shinjuku, Ikebukura, Harajuku, Yoyogi, blah blah blah whatever.
I bought a sweet BAPE shirt at the Bathing Ape shop. If you check out there website, it says Only rich black rappers wear BAPE...and Petes.

Posted by Unknown at 2:46 AM No comments:

This is where I collect my millions...of debts X_x JK! Pachinko was an interesting experience. I won some bling my first hour playing it...which lured me into playing again, thus negating said winnings X_x...Japanese Yakuza run pachinko parlors...you clever dawgs. Pachinko parlors tend to smell of smoke and metallic balls. The whole idea is to shoot your balls with a pinball like lever into a tiny slot...every ball that lands in the slot gives you one spin at the slot machine display. If you are quick and hit extra buttons when prompted too you automatically get 2 numbers for the slot lined up, if the 3rd one matches the 2, boom jackpot...but you win no money. A jackpot simply opens up a MUCH larger slot (at least 4-5x the size of the smaller slot) for a set period of time. The machine chooses a random multiplier. Every ball that lands into this much larger slot pays off a TON more than the smaller the slot. Let us say you get about 3 balls for every 1 ball you manage to shoot into the small slot. For the big slot, you can get as many as 15 balls, or more, or less, for every one ball you shoot into it, and again, it's MUCH easier and bigger...like American women...womp womp

So the owner from my local bar and the regulars invite me out from time to time to eat or drink. When a friend from America comes to visit I look like one popular muppet, but in truth, that's not the case. I have grown fond of my town and have put myself out there on several occasions. This has payed off :) My Japanese is improving, as always, but it's getting much harder! Kanji or chinese characters are the death of me.


I went to teach at a high school in Kyoto for a day. It's a private school for children ... or teenagers I should say, who don't fit in at normal high schools. Some of the girls there are wearing clothes so scandalous that I hesitate to even look in their direction. Despite these crazy anomalies, everyone there turned out to be incredibly nice. The Japanese teacher that I assisted was very young and pretty, a cool mentor. I got to go play baseball with them in my suit and tie in the million degree Kyoto weather. Many a ball was punished by furious American power ;) A fun experience to say the least.

So I've conquered Fuji, partied all night in Tokyo on a few occasions, among various other activities. what's next jerkface? Well let me tell you. My friend Nicky, a high school buddy of mine, is coming to visit in October. He will be my 3rd or 4th visitor to Japan. Crazy that I move so far and people are eager for the opportunity to come. I love it. I plan to take him to Koyosan to stay overnight with the monks on the mountain temple there. Of course we'll check out Nara and pet many a ravenous deer. We'll check out Tokyo once more as well as Nagoya and Kyoto, but maybe no time...or money for Osaka. The job is going well. Not much to report on that front. I love my students at one school :D
I won't pictures from it here but I went to Roppongi, the foreigner district in Tokyo, and partied to the break...of...dawn...shawty got it going on...To be honest it was amazing. I was not myself. I put on a wonderful facade and acted way cooler and different than I've ever been. In Tokyo, once you miss the last train at 12am, you have to wait til 5 or 6am to catch the next...Fortunately the bars and clubs don't close til well after these times... You walk out after the sun comes up to find many Japanese sleeping on the sidewalks in pools of various substances. I had at least 5 girls who I did not speak a word to come up to me asking for my number...this isn't bragging and I'm not cocky...BECAUSE THIS NEVER ONCE happened in America to this degree or level of intensity. I think the girls in Roppongi are just hunting for Americans or interesting foreigners. It was nice to be THAT GUY for the first time ever xd. That, combined with my outgoing confident masquerade = 1 cool cat. I had to turn down every girl, that made me look cooler I'm sure. My heart belongs to another perhaps tehee. I ended up karaoke'ing with Liu Mumu up above and her friends Lee Tan and Qiaoyuan on another night near Tokyo. I look forward to going back and exploring, experiencing...

There's still so much of Japan I long to see and do. I'm grateful for my family for the support and encouragement they've given me and all my new friends here in Japan. I hope this ride never ends :>